THE BUZZ STARTED started as the Prime Minister walked into the room, guests edged forward, ignoring their companion’s conversation. Who was going to meet his eye and be introduced? Tall, immaculately groomed, relaxed and confident, David Cameron’s first intro was to a VIP for the charity in whose honour the reception had been arranged. A couple of minutes of smiles, polite laughter chat…. and then it was the turn of my host, the Daily Mail’s Transport Editor Ray Massey to grip the hand of high office and say hello. Ray has grilled the last five PMs and scalped a few ministers in his time, so the small talk was easy and he suggested David Cameron might exchange his glass of water for a more relevant Guinness. Ray bantered with him about the earlier Prime Minister’s Questions. OK, so now I’m now a metre away from the man of the moment (David Cameron, rather than Ray…) What happened next? 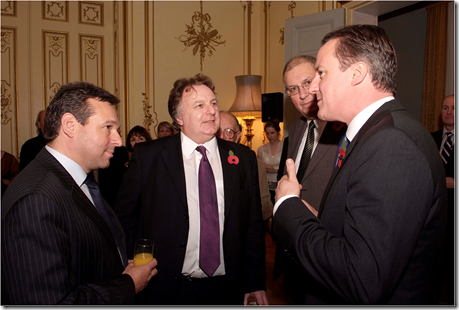 It was Wednesday night at the Irish Embassy in London and I was invited to the reception of the Journalists’ Charity (www.journalistscharity.org.uk) an event long-planned and a commitment honoured by the PM after agreeing to speak to the group many years earlier.

History was made. It was the first visit by a serving Prime Minister to the Irish Embassy in London and the wit flowed between the Ambassador Mr Bobby McDonagh and the PM. 10 minutes of un-scripted speeches, much (genuine) laughter and bonhomie from this gathering of the UK’s senior journalists, a quick pause for a final drink, a word to the guests and that was it. The PM departs and the serious drinking can get underway… trebles all round (Guinness mainly).

The event was important for the Journalists’ Charity which supports those in the industry who have fallen on hard times and provides backup for a group of people not always considered to be the most popular in society. I was a journalist at the start of my career and so this charity is relevant to me – in fact of the 100,000 UK journalists, only 5% are currently supporting the organisation so publicity is certainly needed. The irony of this is not lost on any of us..

So, what do you say to the Prime Minister who is standing in front of you, making eye contact and wondering who the hell you are? There’s an old expression about business meetings that goes something like..

‘you can sit quietly at a board meeting, say nothing and people will wonder if you’re an idiot. Or, you can open your mouth and prove it’.

I decided to continue with silence, having nothing amusing, entertaining or informative to add to the discussion and the moment passed. Maybe next time I’ll have a witty line…

What would you have said? Answers please…

Donations to the Journalists’ Charity are more than welcome at: http://bit.ly/dv2utu . Thanks to Glyn Genin the legendary FT photographer for the images. He gave his time during the event to help promote the activity.